Posted by -Kamikaze Dan on 10/13/2022
Hello world,We're back!My travels through Philippines and Malaysia in August were just amazing, and I really have to acknowledge my hardcore fam Talib, Aizu, Tweety, Emman, and Francis for being the greatest hosts and showing me such an incredible experience.Felt so fucking good to see so many friends, make a lot of new ones, reconnect with people....couldn't have been better. I think everyone in my life has seen the bajillion pictures I took, if for some reason you're curious, e-mail me and I'll send them to you too. From Talib touching a monkey at Batu Caves to Kirk fucking with that caterpillar and having the ancestors seek revenge, blowing all my cash on Color Game, the most beautiful beaches, snorkeling in a shipwreck, Philippine Violators gig (overshadowed only by Hard K, if you know you know), talking Demon Slayer with Talib's kids, balut, pig's head, my 1-day side adventure to Saudi Arabia is a whole thing in and of itself....yeah, too much to say.While the actual up-until-daybreak all-night discussion was Talib and I digging into current One Piece fan theories, I did receive an intense crash course in Asian punk history, scene politics, etc, and while a lot of this is not appropriate to print here, I will share 3 little tidbits I learned that were new and helpful information to me:1. I was given some incorrect information about Third World Chaos LP when I was younger. In fact, this release was entirely paid for by the band, and then distributed through a major label. The Tower Records listed is a domestic Filipino label, a subsidiary of the Filipino major label Dyna, NOT the Tower Records record store chain. (I realize Discogs clarifies the Tower Records thing now, ohhh how the times have changed.)I always thought Third World Chaos was the one with records because they were the most popular, guess I should have figured out on my own that this was not the case, they were just the ones with money, because Tommy is the son of a big shot government official.Also all the Twisted Red Cross releases were originally only 100-200 copies, then they'd get copied relentlessly from there, in some cases into the 100,000+ copies.2. Peaceful Protest (Japan) went to Manila for 2 gigs in 1995, making them the first "foreign" DIY punk band to play in southeast Asia. I simply just didn't know about this before I went to Manila. And Truth of Arize (Japan) went for 1 show in 1999, making them the second. Random! I wish I knew more about how the Japanese crusty-Manila pipeline was built and what happened to it.That makes Code 13 (USA) the third, in 2000, if I understand correctly....and first from outside Asia. 3. Philippines had 3 pressing plants in the 80s and actually made their own domestic pressings of The Clash, Sex Pistols, etc at the time. I think this plays a huge role in understanding why the classic Filipino bands sound as they do, and why they all sing in English.Maybe everybody already knows all this, I didn't, I found it all kinda revelatory and helpful to conceptualize and understand a lot of little details of southeast Asian punk I am viewing as an outsider.Anyway, I also did my due diligence while I was out and I brought back a preposterous, back-breaking volume of crap for the distro, so let's dive in....-Dan--------SEPTEMBER NEW ARRIVALS

SO MUCH ASIAN PUNK SHIT. I will touch on a few highlights.First, and in my opinion most importantly, a spread of classic Filipino punk reissues on vinyl. For various reasons, these have not been distributed off the island. So this is your big chance. I am an even bigger fan of Philippine Violators LP after watching their gig and seeing they are fuckin terrific in their current incarnation. But perhaps, if you're only going to get one, do Fatal Response comp 12" to get a good spread of bands.From there, you need to hear these 3 Istukas Over Disneyland tapes. One of the most influential Filipino punk bands, playing their unique brand of oi since 1994 and just released their newest album this summer. Also the legendary Choke Cocoi....more on them later, cause I am releasing their LP soon, but grab the Choke Cocoi/Tiger Pussy split 7" to get hip to it all now.I'm thrilled I could bring home a solid stack of Masakre LP. For me, this is the best current southeast Asian band, and one of the best bands in the game right now period. Crust as fuck existence raw punk shit mixed with old school death metal in all the most ideal ways. I saw this sitting at Tandung and flipped my wig, had no idea it had come out, Wan gave me a good lead and I got some copies squared away....beautiful. And Masakre ain't the only great Indonesian raw punk band, I highly recommend the Kontrasosial and Zudas Krust tapes as well. Veteran bands that play punk exactly as I like it: all noise, no music. Kontrasosial made a huge impression on me when we played together back in the day, and Zudas Krust are SPHC alumni, of course I fuckin love it.Plenty of great grind from Singapore and Japan in there, but speaking of shit that arrived from Japan while I was gone, I want to highlight the End of Pollution/Crudia split 12" that sold out in a literal blink of an eye from everywhere, and the ????C.C CD, which I haven't listened to yet but being a 5 song CD on Bloodsucker Records with a reasonable number of mohawks in the band photos, I'm confident this is exactly the sort of Japanese hardcore I am so into. =) 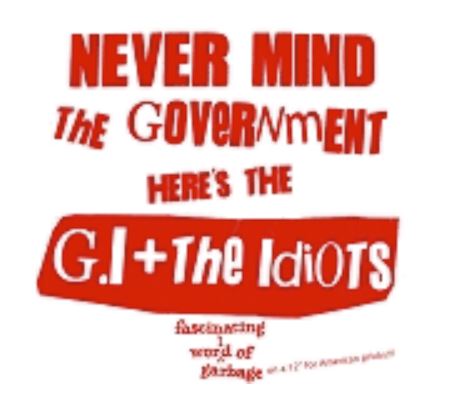 And while we're on Asian punk shit, I'm happy to introduce the first Believe in Punk release: a domestic version of GI + The Idiots first album on 12". This is my personal favorite of the classic Filipino stuff (but don't worry, I already know the objectively correct best are Urban Bandits album and Dead Ends second album), so when the guys pitched buying their 50 leftover records without jackets and screenprinting my own jackets for the USA, of course I couldn't say no."Believe in Punk release??" Yes this ain't no SPHC thing, it's working on a different financial flow with different ways of doing things, blah blah blah, to me it's different and that's what's important. BiP-2 is also currently in production, more on that later.Also want to note that this is a pre-order. Pre-orders, another difference between BiP and SPHC. I could ramble about this but I won't. I'm hoping we'll make the screens this week and print the jackets next week. If I fuck this up, I apologize in advance. 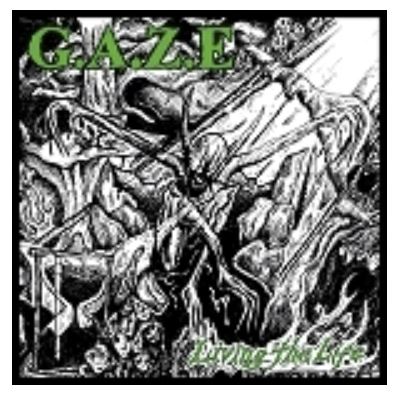 Okay, onto the rest of the world, and first, I want to highlight this GAZE debut EP. Because for me, this is the top punk 7" of the year. I cannot stop listening to it. I was hyping it on the Discord, I texted it to a bunch of my bandmates, many of my friends in Finland have been preaching about this band since the demo tape and it's taken me a little to get up to speed but I am sold now, I am a believer. This is the single band I am most excited about in 2022 and that I cannot wait to hear what they do next. I give this record the HIGHEST POSSIBLE RECOMMENDATION.

As for the rest of Europe, I know people are into stuff like Exil EP and Ruidosa Inmundicia LP (actually I'm super into that one too LOL), for me I am most pleased about Knuste Ruter LP, with their classic Norwegian style of hardcore that perfectly balances catchy and memorable songwriting with tough punk brutality. Somehow I now have 4 LPs and 2 7"s by this band and I fuckin need every one of them!If you're more of a need-for-speed guy, I am tickled by this Ventilator LP that's been released, some previously unheard sessions from the golden age of noisecore, and I am absolutely thrilled by a new Serpents Anus demo tape, the most exciting new noisecore band in the game for me. This is that real shit!!!We also got copies of Totalitar - Vi Ar Eliten LP reissue, which makes me feel weird because at 35 I'm now hitting the age when records I clearly remember buying new at the time are now getting reissued as anniversary editions, "long out of print", etc. One of my top favorite bands, this record annihilated me when it came out and I've never stopped listening to it regularly. Timeless. Perfection.

Speaking of reissues tripping me out, World Burns to Death first LP 20 year anniversary reissue. Was it seriously 20 years ago that I bought this? I was 15 and put a money order in the mail to Hardcore Holocaust and was introduced to one of my all-time favorite records by one of my all-time favorite bands, a band that so deeply inspired me and so influenced my life path in the most fundamental ways. Has it really been 20 years? But this record still sounds as powerful and fresh as ever to me, a timeless classic. Hey, a good song is a good song no matter what.Speaking of shit I liked at 15 and still like today, there's a new Hellshock LP and I haven't listened to it yet but I bet it kicks ass. I did listen to new Nightfeeder LP since everybody is going berserk over it and it definitely kicks ass. Actually I like it more than Deathraid! And one that snuck up on me, Death Tremor demo tape, the latest and greatest Tony Bartek band, this time with a much more clean and polished execution and slightly more epic style. 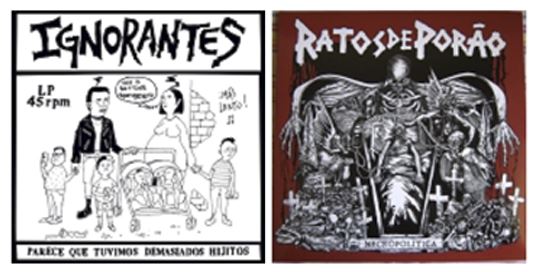 If there's a region of the world I like even more than southeast Asia, it's South America, and while there's not a lot to show for it on this update, it is inarguably "all killer, no filler". Ignorantes LP is damn near a modern classic in my eyes, one of the essential releases of this year. This is real punk shit!! And a new Ratos de Porao LP, and what's even more wild, it's fuckin great!! RDP rank up there with Gauze, Dezerter, Terveet Kadet, arguably Riistetyt, as bands that still "got it". Powerhouse Brazilian hardcore with appropriate thrash metal overtones, straight from the masters themselves.

AND FINALLY......some patches.and that new Forward shirt that sold out, we got a big ass box of them. One of the best punk bands ever, enough said.For more commentary on this stuff and more, please scope our Instagram page, where we review choice new arrivals as they come. If it sounds cool when we talk about it, it'll sound even cooler when you hear it streaming on the online store, and even cooler still when you buy the record and slap it on your turntable. --------------on the way for October:latest hardcore and punk from Japana nice box of Hiatus LPs and Sedition 2xLPs, where is it???big box of Peruvian hardcore CDsmore More MOREThanks and talk more later.-Dan
Previous Post
Next Post