Posted by -Kamikaze Dan on 10/23/2021
Hello world, Lately I'm thinking a lot about the political situation in my city. In a little over a week, we vote on whether we should abolish the police department here in Minneapolis, and transition it into a "Public Safety Department" with an "all-encompassing view of public health". I'm pretty squarely in the Vote Yes camp. I got the sign in my apartment window. I do believe there's a better way of accomplishing public peace and order. I'm sold on a vision of the world where not every disruption to public life brings the risk of death as armed bullies descend upon us. A 'world without police', as Ta-Nehisi Coates describes. Where there's a broader variety of resources available to people in crisis, a more holistic and humane approach to problem-solving, and police only come when called upon rather than murdering people while performing unneccessary traffic stops.BUTI understand too why people want to Vote No. The city charter amendment gives the City Council 30 days to create this "Public Safety Department" from scratch, and as far as I can tell, nobody has proposed any sort of practical or detailed plan about how they'll accomplish this. It's easy to say "well if someone's having a mental health crisis, we'll like, just send a mental health expert instead of an armed police officer". Yeah I agree that's a better response, but how do you make that determination quickly and efficiently as we're looking to do from a 911 call? And what mental health expert are we sending exactly, where are all these people coming from? What's the training like, what's the procedure like, what's the budget like? So many questions and nobody seems to have any answers. Do we really think these answers are going to come in 30 days?Currently our city police department is accountable solely to the Mayor. The public has no oversight nor window into the police. Ostensibly the Public Safety Department will be under the umbrella of both the Mayor and the City Council, and topics like training, number of applicants, recruitment process, etc, all this sort of stuff will come under public scrutiny. I believe this is a good thing, without a doubt. But it does put a lot trust in the City Council, who have not actually done anything to help our violence-ridden neighborhood and have thus far made no good-faith efforts to solve the kinds of problems we're now assigning them to solve.Personally, this doesn't bother me so much. I'm a federal employee after all, in general I have a higher degree of faith and trust in government institutions. They're made up of people just like me and my coworkers, right? But I can understand how others may not trust the City Council as much. Nonetheless, I still think it's better to roll the dice and hope we get something better, than to stick with a police department that we all agree is dysfunctional, not accomplishing what we're looking for it to do, and has basically no chance of meaningful reform.Last week Hannah and I went to a public debate on this topic to get better informed, make up our own minds, etc. It didn't really move either of us from where we were at, but it was very cool to me. If you're curious, it's up on YouTube: WATCH LIVE: Minneapolis public safety ballot question debate - YouTubeAt the end of the day, I'm a lot less concerned with whether people Vote Yes or Vote No, a lot more concerned with people actually engaging with the topic, making their own sensible opinions, and actually showing up to vote. Towards that end, I did a round of text-banking today!-Dan--------OCTOBER NEW ARRIVALS 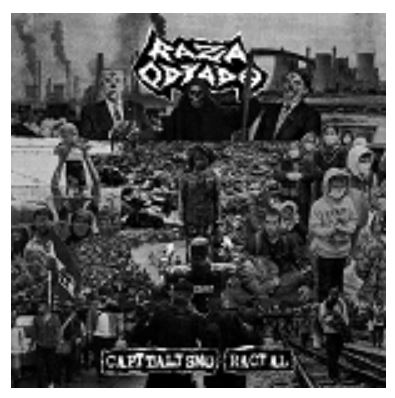 This month I want to highlight this Raza Odiada LP. Honestly, because I just happen to be spinning it right now LOL. I was planning on writing about something different, but fuck it. While their previous split 7" didn't make the cut when I was slimming down my personal collection, this LP is really hitting all the marks for me and I know it's going to go completely off the radar for most people, so I want to give it a little extra visibility.Raza Odiada are based in Barcelona but are composed of a collection of South American immigrants. While I remember the split 7" being a bit more brutal crust, this is more like loose and crude metalpunk d-beat, with the kind of fast-paced vocals common in South American hardcore. Relentless and bludgeoning drums, quick metal riffs that lean on Discharge, nonstop velocity (I mean there's basically no mid-tempo parts at all), a picture-perfect raw and warm production. Just a humble political punk record in a time where I feel lots of punk is too artsy and/or trying very very hard. Really getting it done for me tonight, I recommend it.

If you need more blastbeats than a d-beating record, we got you covered. I know a lot of people were asking about Lymphatic Phlegm/Neuro-Visceral Exhumation split 12", actually we are almost sold out of them now but we still got a few more. For me, it's all about this Rot first LP reissue, one chunk of the soundtrack of my youth! Gah, I put it on and I feel like I'm 15 again, forever love this shit.Oh also my stupid band has a new tape out now, Anal Butt/Cum Sock split tape. With band names like that, do I even need to describe anything?

If you're living a crust as fuck existence, we got you covered. There's so much hype around Sistema En Decadencia LP, and I agree with all of it. Tremendous record. But also, you know I can't get enough GREEK CRUST. Negative Stance discography LP is a great listen, maybe not totally "crust" but they had a record on Profane Existence back in the day so whatever. Personally I'm more apt to reach for their LP though. For a more modern take, fuck, the Paroksysmos LP is easily their best work yet and is a great middling point of crust, grind, and metal, sounding informed but not copying anybody else. I think this sort of sound was more common in the 90s, before everything got so strictly regimented. GREAT record.

If you're a hardcore kid at heart, we got you covered. All I want to say is NEW RESTOS DE TRAGEDIA EP. From the 90s classics to the split CD to the split 7" with Coche Bomba in 2012 (GREAT record on both sides) to this new EP, RdT continues to be raw and wild, full of passion and brutality. I love this style of Colombian punk and RdT continues to play what I want to hear.But also worth mentioning, we got plenty of other killer Colombian punk records up now. We got Dog Flashback demo tape, new band of Punch in the Face crew out of Chicago. And we got Antiphaty LP, a classic of Indonesian punk receiving a deserved vinyl treatment (HIGHLY RECOMMENDED!!!).

And finally, if all you need in life is a catchy song....we got you covered. Chaos in Colombia comp LP covers all your bases for oi, street punk, hardcore. We got copies of The Murderers LP, which is a hot ticket item locally and I think us and Havoc Records are (for now) the only places to mailorder them from? Check the Instagram for more info on that, because right here, I want to talk more about Antisocialiniai Psichopatai tape. HIGHEST POSSIBLE RECOMMENDATION!!!!! This is that real shit. I know it's kinda tucked away at the end of this e-mail, and maybe it's not necessarily "catchy" in the same way as these other records and tapes. Whatever, this is the true meaning of punk music for me. Raw but tuneful, loose but coherent, brimming with attitude and conviction. This is all I've been listening to for the last few days. YOU NEED THIS.For more commentary on this stuff and more, please scope our Instagram page, where we review choice new arrivals as they come. If it sounds cool when we talk about it, it'll sound even cooler when you hear it streaming on the online store, and even cooler still when you buy the record and slap it on your turntable. --------------next month:-essential Polish reissues-more Swedish d-beat-JAPANESE SHIT-more goregrindand more more more !!Thanks and talk more in November.-Dan
Previous Post
Next Post