Posted by Kamikaze Dan on 11/14/2020
Hello world, As probably everybody knows, the US Presidential election is right around the corner. Feels like the stakes are high. We've already seen protesters getting shot by right-wing vigilantes and thugs, news about foiled domestic terror plots to kidnap the governor of MI, to assassinate Joe Biden. I remember having a discussion last year with some Canadian acquaintances about that podcast It Could Happen Here (about the possibility of a second American Civil War) and, while I still haven't listened to that podcast, at the time I felt a huge rebuke at that idea. "No way! America is the land of the apathetic and self-centered, that kind of social tension and upheaval just isn't realistic." Clearly I was proven wrong hahaha. It's a crazy time to be alive.Well I'm pretty far past the point in my life where I get anything out of telling other people what to do, how to feel, etc. Personally, I'm going to vote for Biden, for better or for worse. And we're organizing a protest for election day so hopefully that'll be a success. I hope that whatever people decide to do, vote or not vote or get on the streets or stay home or whatever,  it's done with intention and with a belief that it's the best course of action.In other news, we now have a Twitter. In theory this is where we're posting more real-time updates about new arrivals, while we go into more detail about the choice ones on our little Instagram. In practice, we're still working it out haha.I had a one-two punch recently as I watched After Truth (the HBO documentary about fake news and disinformation) and The Social Dilemma (the Netflix documentary about social media) over two nights. I HIGHLY recommend these two documentaries, I think this stuff is so on-target and important and applicable to current events and our modern life. These documentaries offer some compelling arguments and powerful perspectives that, personally, I already agreed with going into, but there were a couple of finer points I was wrestling with in my own mind that these documentaries really laid to rest for me.Anyway after watching those documentaries I wanted to toss my computer and iPhone into a hole, bury them deep, and move into the woods to be a hermit. And now here I am telling people 'We'Re On TwItTeR aNd InStAgRaM sUpPoRt ThE uNdErGrOuNd D00d", the cognitive dissonance for me is palpable. But also I'm convinced this is good business and that's what I'm aiming for at the moment so bear with me lol.okay blah blah blah nobody cares, caught me in a ramble again, whatever, let's talk records.--------OCTOBER NEW ARRIVALS 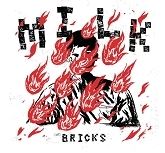 This month, I am most excited about the new Milk EP. Gotta admit, I'm posing out a bit. This was totally off my radar until it got posted in the discord. Then I just assumed I wouldn't like it, but gave it a listen anyway cause, you know, conversation and shit. Fuckin good god, what a shock to my system!! Absolutely floored me.I'm a big fan of clean twangy guitar, quick speed and arrangements hardcore like Formaldehyde Junkies, Uber, Peggio Punx and Sun Children Sun, Skitklass....the clean twangy guitars can really add to the velocity and attack, makes everything feel so much more frantic. But there's only so many bands that play like this, it's not a common thing.I guess I didn't know that Milk was the latest band to take this idea and run with it. To my ears, with the breakdowns and some of the melodies, this is firmly grounded in a Minor Threat sense of USHC, but with the kind of relentless arrangements and quick songwriting that I'm looking for. Fucking awesome!!!! I gotta find the rest of their records!

Today we got a GIANT box of Japanese hardcore stuff in the mail. Of particular interest to me are The Tits new LP, arguably the best noise punk in the game right now, and The Savages new EP, I totally adore their style of punk that draws from the tunefulness of classic German punk but adds an extra emphasis on emotive and dynamic songwriting. Of particular interest to you, maybe Solpaatos collection LP+flexi or ETAE discography CD, if you missed out on any of the older or more limited releases along the way by these great bands.

We have a plethora of discography and collection CDs in case you're like me and need some new driving around music. Personally Olho Seco collection CD strikes me as summer music, so fast and furious, but Hellbastard demos CD is certainly a winter CD, crust as fuck existence, slow and dreary. Or maybe Mellakka discography CD, cause, you know, where does it snow worse in this world than Finland?

And finally, we have the usual spread of all the latest and greatest new releases from around the world. We were all really impressed with the new Paranoid LP, their most metal effort to date and it suits them very nicely. But for myself, nothing can top a new Fossil Fuel/Toughskins split 7".

(Oh yeah, we also restocked Forgotten Prophecy discography LP and Naytia discography LP for those asking about them. Very last copies from the label, so they won't be restocked again.)For more commentary on this stuff and more, please scope our Instagram page, where we review choice new arrivals as they come. If it sounds cool when we talk about it, it'll sound even cooler when you hear it streaming on the online store, and even cooler still when you buy the record and slap it on your turntable. --------------coming in November:-mass e-mail more in the middle of the month rather than clumping everything together at the endcurrently stuck in the corona postal vortex so keep checking back:-a gargantuan amount of Finnish hardcore, including 3 more new releases on SPHC Records-tons of European and Japanese fastcore and grindcore-latest FOAD releases-some of the latest Japanese hardcore CDs and recordsand more more more !!Thanks and talk more in November.-Dan
Previous Post
Next Post