Posted by -Kamikaze Dan on 6/16/2022
Hello world,First, let me say, sorry I was dragging my feet on mailorder over this past month. I always joke about this with my friends but my fuckin sleep apnea continues to get worse and lately I haven't had much energy to live my life. Feels like I'm living in slow motion. But I FINALLY get a CPAP machine tomorrow so fingers crossed it's as transformational as everyone says it is. I could really use it.Next, I'm going out of town for most of June. Our podcast is hosting a few panels at a big anime convention, then I'm back in Baltimore for a second to see everybody, return home for a week to play a gig, then I'm going south for a little to do some recording work. So, probably no updates of anything between now and end of June, then when I return home, all the accumulated arrivals will go up for sale at once.And I will get all orders mailed right up until I leave town.Okay, so lately what's on my mind is my mom's experiences on Twitter.My mom is an interesting character and she is a known persona amongst my friends, but I'm going to skip all the context and get to the more specific angle that I'm focused on.My mom tweets out relatively standard Democrat talking points and, in the sea of the internet, I don't think anybody's particularly paying attention. But apparently one of her tweets (regarding varying international health standards about baby formula) got some level of traction and feedback, and someone called her a bigot. "Daniel! Someone called me a bigot! Am I really a bigot??? What's so bigoted about what I said? Why would someone say that?" I could hear the stress in her voice as she was describing the situation to me, hear the gears grinding as she struggled to process why someone would say that to her in this situation.When people around my age bracket or younger hear this, we just roll our eyes. It'S tHe InTeRneT D00000dE. Of course people say all sorts of random shit, have the most reactionary and surface-level takes on everything, say all sorts of things they'd never say in real life....because it's the internet, it's detached from reality by layers of physical distance and anonymity. And who even cares what some random nobody says to you on the internet? They have no relation to you and your life. Growing up with the internet, this is simply intuitively obvious to us. Whatever random people say on the internet, generally speaking, just rolls right off you like raindrops on an umbrella.But my mom, who, as far as I can tell, barely uses cell phones and computers and has never seriously interacted with the internet prior to discovering Twitter a few months ago, doesn't find this as intuitive. She's looking at all this stuff as a genuine discourse. 'Why would someone say that to me? What have I done that would deserve such a comment? There's gotta be a reason...' and then you're stuck with all sorts of doubts, anxieties, mental hardship as you try to grapple with someone's random shitty take that lacks any context or follow-up or attached discourse.I told my mom, this kind of behavior isn't healthy, especially if you don't have the tools to process it correctly. Tweet what you want, don't look at the responses, don't engage with anyone, just shout into the void and leave it at that. I left this conversation having real concern for my mom's mental health. Is she going to be sitting around having petty Twitter flame wars with bots and trolls as she tries to make sense of why someone would say something rude or simplistic to her? Accumulating stress and negativity?I often think about "old people on the internet", because this is apparently a big political phenomenon in our country. Think of how many times we hear a trope of "older guy votes Trump and gets all his news from Facebook, and it's all practically conspiracy theories".....but our everyman lacks internet literacy and assumes everything he reads is true, every engagement is genuine and reasonable. What happened to the days when adults told us we couldn't cite websites as sources in school because "anybody can publish anything on the internet"?Sometimes I'm not convinced any given generation is better at internet literacy, information judgement, than any other generation. But at the very least....maybe we should strive to keep our elders off the internet, for their own sake.Okay, records. I feel like May is a bit light in terms of "quantity of different new releases" but makes up for it with quality, this is a SERIOUS all-killer, no-filler update.--------MAY NEW ARRIVALS

This Kolumbia LP is as fuckin amazing as anything else in this update but I imagine this band is completely unknown, so deserves some extra attention this month. Kolumbia is part of the new generation of Finnish noisecore, which I hope to bring a lot more attention to in the coming months, and their debut LP is a fucking mess of sounds, distortions, abstractions, sonic disorder and chaos. They have one foot in noisecore, but one foot sticking out at a weird angle (possibly broken leg? hip out of socket?) into a zone of totally freaked out noise jam. I think this LP is a little light on the attack and heavier on the vibes, if you get what I'm saying. If you're into noisecore like CSMD, maybe Gerogerigegege, Napalm Death is Dead kinda, this gets a BIG RECOMMENDATION.

First, SPHC has 3 new releases out! Fuck that sure took a long ass time. Well I kinda stopped caring about the label for a bit, but this year I'm re-oriented towards making punk happen, and we got 8 other releases in various stages of production right now.You probably haven't heard of Detesto EP, tucked away in Campinas Brazil with only a couple gigs under their belt, but I think they caught lightening in a bottle with this recording. Brutal kang perfection, for me it's the best 7" of the Disfear/Wolfpack/Uncurbed school of d-beat in many years.      Probably haven't heard of Agravio EP either, although I bet you remember their old band Sacrificio (whose LP I released and EP I helped with). To my ears, Agravio picks up right where Sacrificio left off, the differing personnel kinda brings differing dimensions but with the same songwriter, that signature style is still in full play.Buuut I bet you remember Sludge EP, because of their prior LP on Crust War years ago, which I've stocked up on more copies of. This new EP is their best material yet, if I do say so myself. =)

We got a couple of M-bags of all the latest FOAD stuff. You already know you need Asbestos LP reissue, one of the most crucial Japanese hardcore obscurities with its gruff mettalic Japanese hardcore style tempered against UK anarcho-punk/crust influences. Juntess collection 2xLP too, absolutely one of the best bands of this ilk, with the catchiest songs and hottest solos. I'm personally very hyped on Shot Gun discography 2xLP, I wrote about this release in detail when we stocked the CD version of it a year or two back. (I'm also VERY hyped on new Asbestos LP!!! I haven't heard it yet but I'm expecting it'll be terrific. CD version is in the mail, and surely we'll get copies of the vinyl version too when that drops.)We also picked up copies of the previous metal releases, cause if I was a metal guy I would def be rocking shit-fi southeast Asian black metal like Euronymous/Beheaded Nasrani split 12". 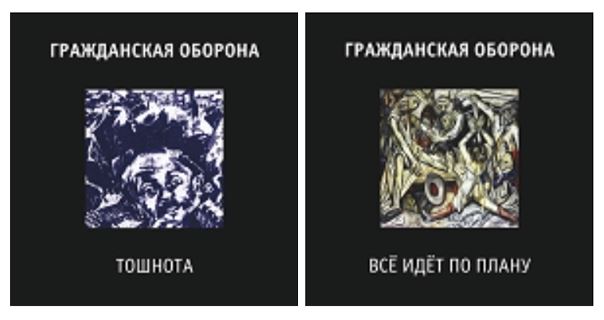 We got the latest Grazhdanskaya Oborona reissue LPs. Absolutely essential shit, personally I need every single one of these and I spend a lot of time listening to this band over the last few months. I feel like we've brought enough of these through that you already know if you're a fan or not of their raw Siberian art-punk.

We got more Ignorantes tapes. Not many on the store, cause most sold locally. You already know you need this shit. Best band in the game these days.

And finally, I never forget my grinders. We got a couple cool goregrind and gorenoise shits from Bringer of Gore, but I am most thrilled about new God's America LP. In this world of relatively interchangeable power violence hardcore, God's America shines brightly with personality and attitude, one of the few bands that gives me that feeling like I'm 15 years old in my parents' basement discovering the Slap-A-Ham catalog on Napster. I adore the new LP, only wish we'd released it over here.For more commentary on this stuff and more, please scope our Instagram page, where we review choice new arrivals as they come. If it sounds cool when we talk about it, it'll sound even cooler when you hear it streaming on the online store, and even cooler still when you buy the record and slap it on your turntable. --------------on the way:random hardcore records from around the worldCDs!PATCHES!2 more new SPHC releasesnew Anal Butt release(s?)all going on sale at once at the end of June, without any updates between now and then.Thanks and talk more later.-Dan
Previous Post
Next Post