Posted by -Kamikaze Dan on 7/18/2022
Hello world,First, housekeeping. I'm galivanting around the globe from July 28 to Sept 3. The webstore will stay up but there will be no updates and orders won't be shipping throughout that time. I will also probably not be buying any stock, so if there's any crazy or cool releases dropping in that timeframe, it's a reasonable assumption that I won't be stocking it. You've been warned. Up until that time, I'll be updating the webstore frequently and shipping out as quickly as I can manage.So.Has anybody else noticed we're sliding into a fascist theocracy?Roe v Wade getting overturned is very upsetting and such an enormous embarrassment to our country (as if we're not all embarrassed enough already). And it's clear that gay marriage etc will be gone by the end of the year, no doubts about that in my mind.Today the Supreme Court ruled against the EPA, curtailing their power to impose regulations for greenhouse gases on private industry. This is an unmitigated disaster for the planet Earth, just in general. Not that I really saw any hope of the human species avoiding man-made environmental armageddon, but talk about not even trying to find a way out.But the scariest one of all is still coming.Today the Supreme Court agreed to hear Moore v Harper, out of North Carolina. In short, this is what's now called a "independent state legislature" theory case, arguing that state legislators have sole power over elections in their state. This opens the door to state legislatures arbitrarily doing what they want with elections. Gerrymandering, tossing votes, sending electors at their leisure, etc. The strategy is for Republican party to continue to hold power indefinitely, all that "stealing the election"-type stuff is back on the table by virtue of a Republican state legislature deciding 'fuck the popular vote, we'll just send our electors cause fuck you' and there'd be no legal recourse. Very doomsday/the day democracy dies style shit. And there's not a doubt in my mind how the Supreme Court is going to vote on this, seeing as they're a tool of the Republican party at this point. I mean if this had passed through a few years earlier, Trump would be President now because, for example, Arizona (or any number of states) could use their Republican state legislature to declare Trump the winner because 'fuck you that's why', send Republican electors to the electoral college, and there you go....Sooooo what are we going to do about it?That's the hard part I think. "Vote!". Yeah, sure, I mean I am planning to, but like....Democrats currently hold Congress and Presidency, why are they not codifying Roe v Wade? Why are seemingly so few Democrats going berserk? Why is Biden appointing a staunch anti-choice conservative guy in a lifetime federal judgeship in KY....for "reasons", some apparent backroom deal with #1 public enemy Mitch McConnell, but we don't yet know for what? It's like these people don't understand there is a philosophical war going on, much less that they are at the bottom of the ninth and about to lose?We could organize and take to the streets, and generally I think this is a good idea, but honestly there's just not enough popular momentum at the moment for this to happen. There's not a concrete enough target and the energy is too dissipated. I'm thinking about how the news was speculating on "huge, violent protests erupting" over Roe v Wade stuff. But like, what are people going to do, go smash up the local courthouse that has literally nothing to do with the Supreme Court? Go tear up the local Christian church that has nothing to do with the Supreme Court? Where is the energy supposed to be focused when these systems and institutions of power are relatively vague and simultaneously so big yet so small. When everything, everyone is just a singular cog in a huge ship that seems to be driving itself. Well, respect to people on the ground in DC doing the good work. But I don't know what we're supposed to do here in Minneapolis. I mean I text-banked for our local protests and went to public meetings and such but how much good does it really do? It's all so 'David and Goliath'. I keep doing it all because I feel it's the right and proper thing to do and I think it's better than doing nothing...but I'm just bathed in nihilistic despair these days, it all feels so meaningless....It'd be cool to see Democrats and political opinion in general be a bit more sympathetic to the plight of the American people and just call it as we see it. "The Supreme Court has lost its place as a politically neutral institution and we should not be bound by its rulings." "These Justices lied under oath as candidates and should be impeached for it." But negging on our political institutions runs the risk of opening a whole new can of worms, because inevitably at some point the flow of power will be running the other way (although this may no longer be "inevitable", but bear with me) and then do we really want some fascists being like "JUST IGNORE THE SUPREME COURT CAUSE IT'S NOT UPHOLDING FASCISM" and people thinking that's at all reasonable? So I get why it's tricky....Anyway I have no great answers, I'm not sure there is one. Just hard not to think about it. I work for the federal government and feel very tied to the USA, I ain't moving to Canada or Europe or some hipster shit. I want to see a good outcome but I simply don't see what it's going to be. I'll vote for all my local Democrats/liberal candidates and such but have basically 0 hope they will help the situation, I just think it's better to try by every means possible than to not even try at all. Fuck, it's all so depressing.--------JUNE NEW ARRIVALS

We got all sorts of proper PUNK (not hardcore) stuff in the store now. I can't recommend the X-Video collection 12" enough, this is 77 punk perfection. A flawless swirl of catchy, snotty, aggressive, rocking, rolling, KBD, ahhh it's tremendous! This collection 12" has both of their 7"s on it. I'd also like to call attention to the new Keiketsu LP. If you're a fan of that ADK sound, you definitely need this!

We got all sorts of MMEETTTALLLLLL stuff in the store now. A lot of it got picked over real fast but still copies of stuff like Hell Bound LPs and Plazma-X CD available. I know a lot of people have gotta be hyped on this wailing Japanese heavy metal stuff like Alkaloid LP, but for me, I need that bumble bee guitar and doo doo drum, I'm loving these Colombian ultrametal reissues like Sacrilegio LP.

Arguably just a few degrees over from metal, we got plenty of new stuff for your crust as fuck existence. You already know you need this Deviated Instinct demo LP and Doom LP reissues, and Rigorous Institution LP is very hyped right now for all the right reasons, absolute masterpiece release and surely one of the top records of the year. Personally I was shocked by Seats of Piss/Deformed split 12". I had never heard of Deformed before but apparently this is the pre-Cress band, and when the label says "sons of Amebix", they weren't kidding. Serious VIBE with this shit, very bleak sounding, like early Amebix with the roughness and repetition and rhythmic nature. This 12" is apparently 1984 comp tracks from both bands, super obscure shit, well worth a listen.(side note on Cress, 8 years later my bandmates and I are still joking about their singer going barefoot at their Sidebar gig LOLLLLLL, treasured memory)I was also very impressed by the new Asbestos CD. Smooth strategy, to reissue the first LP and then drop a new one when you're on the tip of everyone's tongue. This new CD is a great return to form after their more intricate thrash metal years.

We got a mountain of the world's hardcore. Representing from obvious places:Finland (lots of inquiries about the Kaaos unreleased recordings EP, they're up now!)USA (loved these Fatal Vision and Insanity Defense collection LPs, had never even heard of these bands before but this is terrific raw and wild USHC)UK (if you liked the Asylum EP on Demo Tapes, you def will want the complete Asylum discography CD)........all the way down toPeru (Guerilla Urbana collection LP is a MUST for South American hardcore believers!)Indonesia (The Djihard collection LP is a wonderful charged hair and leather jacket obscurity from that part of the world)Colombia (Purga/Karoshi split 7" is worth it for the Karoshi side alone, Colombian lifer maniacs doing Confuse/Gai-style noise punk, best new band in this style in a good chunk of time! totally psycho shit!)Lithuania (The Chronnibals tape gets a HUGE recommendation from me, same crew as the phenomenal Antisocialiniai Psichopatai tape from a few months ago, this is exactly what punk should sound like!!! raw, pissed, rude and crude!)Well this world sucks but punk is still doing alright for itself, like usual. 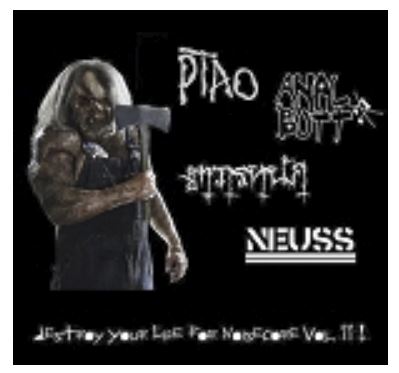 And finally, my noisecore band Anal Butt has a new release out. We make an appearance on this comp 7". I don't normally let other people release my bands, I don't generally like people "touching my stuff" as it were, but we couldn't say no to sharing a record with so many of our friends, and we couldn't say no to Patryk who is such a legit and sincere (and patient! and thoughtful! and kind!) person. Very proud of this and of course it's kinda humbling when anyone wants to work hard on your behalf, so, thank you so much Patryk. =)There are a few other Anal Butt vinyl appearances in various stages of production. And a new split tape I am keen to get into production. And maybe someday I will actually release our LP now that everything for it is complete (who knew getting a high-definition picture of Danny and I with an appropriate background would be a 3 year endeavor??). And make new shirts to go along with it. Yeah, someday, totally, of course, obviously, no doubt, I will DEFINITELY do these things in a prompt and efficient manner.....LOL.For more commentary on this stuff and more, please scope our Instagram page, where we review choice new arrivals as they come. If it sounds cool when we talk about it, it'll sound even cooler when you hear it streaming on the online store, and even cooler still when you buy the record and slap it on your turntable. --------------on the way and added to the store promptly when they arrive:PATCHES!new La Fraction LP - hot diggity damn am I excited about this!!!!S.O.H. demo EPgiant box of southeast Asian metalgiant box of the latest UK punk shitlatest Hardcore Victim stufflatest RSR stuffnew Ratos de Porao LPmore More MORE hardcore from around the worldThanks and talk more later.-Dan
Previous Post
Next Post