Posted by -Kamikaze Dan on 6/21/2021
Hello world, I'm going over to Hannah's house to play Guitar Hero with everyone as soon as I'm done with writing this. So....very quick LOL.I'm all caught up on mailorder except for orders that started coming in over the weekend. Thanks for everyone's patience, as always.Wholesale orders and trades, I'll be hollering at you in the next few days. I'm hoping to be all caught up on mailing that stuff by the end of this week.-Dan--------JUNE NEW ARRIVALS 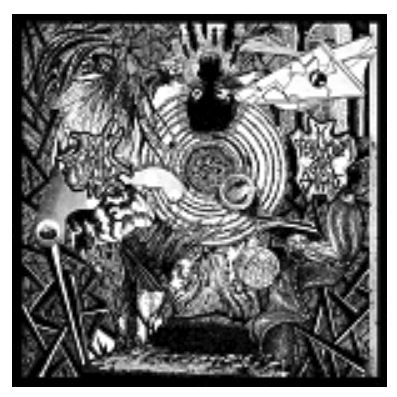 If there's one record of the month for me at the moment, it's the new self-released ???? t?? t????? LP. I've been listening to this regularly since it was first posted online and spinning it on my turntable feels all the more satisfying.I'm not necessarily a death rock/goth/post-punk/whatever fan. In general a lot of these bands don't resonate with me. As Morgan and I jest, too much Count Chocula vocals, a distinct lack of riffs, and songs that aren't catchy nor impactful.But there are a couple current bands that I think do this style better than their peers. Past (Poland), Litovsk (France)....and ???? t?? t????? (Greece). The vocals have just enough 'gruff Greek punk' to them, the synths actually add atmosphere and dynamics, the guitars are full of both earworm noodling and engaging riffing, the rhythm section knows when to rock and when to groove. The production is dark and moody, dense, really accentuating the emotion of the songs...basically, I think this is the best single record in this style over the past 2-3 years. This record gets the HIGHEST RECOMMENDATION, if you're like me and you basically only need 1 record of this style per year....THIS IS THE ONE. And if this strain of punk is more your thing....how are you living without this??

Oh and one more thing I want to specifically highlight for this month. There's a new issue of Garbage Fountain zine out now!! You already know this is required reading for grind/noise freaks. This issue continues with the on-going focus on current Finnish scene, has tons of reviews, and a special feature on noisecore zines from the last 10-20 years. Which, in my opinion, is a pretty remarkable research project. Skimming through it real quick, it definitely had me leaning back and reminiscing. "Oh yeah, I remember interviewing Globsters for Backwoods Butcher zine LOL, fuck."

First and foremost, yes we got the hyped FOAD releases up for sale now: The Rustler 2xLP, Swindle Bitch LP, Kansai Hardcore book. I know everyone's real excited about those, for obvious reasons. I think the book is a very interesting read and I'm intrigued by the focus on stuff that's not popular in the west: Laughin Nose, Rapes, Mobs, etc. Not that it should be surprising, these bands are huge in Japan, I just think the gap between what's popular on home turf vs what's popular abroad is always interesting. I also didn't realize Zouo was quite the centerpiece band....I wonder if this is a reflection of the recent reissues? Anyway, massive respect for having this book professionally translated, I know that's an undertaking and it's valued by fans.We also have a couple cool new patches from Karasu Killer, making the finest deluxe and 100% official embroidered patches in the game. And copies of Povlacion/Desperdicio split tape, total Spanish d-beat style for the raw maniacs.

While most collector types are totally on top of Japanese stuff, personally I've been leaning more into Finland for the past few years. And we got a giant box of tapes, zines, shirts, flexis from Finnish Hardcore 80-85 that have me going apeshit in my apartment. I'm sure you can guess by the label name what stuff like Dachau tape and Colditz comp tape sound like. Rattus tape + zine is a crucial one for fans of this band. We also got a couple black copies of the official Kaaos shirt.....I'm already wearing mine!

We got a giant box of the latest and greatest punk shit from Spain. If you love Accidente like I do, you have to hear stuff like Pols LP and Rotura LP, the influence is obvious. I was also particularly impressed by Hyokkays EP, their ramshackle sound recalls the best nihilistic wild Finnish hardcore but with an execution only possible by Spanish bands.

We got A TON of noisecore/goregrind/grindcore tapes from around the world. Goregrind names like First Days of Humanity, Pharmacist, Haggus, Golem of Gore are all stuff I've heard of but never really checked out, so it's been a very gurggly week as I process all this stuff. Current Finnish grind/noise like Kharkharamapathik tape, Death Basket tape, Romutus tape I am a bit more familiar with and really enjoy, highly recommend all this stuff.Also, the album cover hasn't been uploaded to internet yet, but we got copies of new Days of Hate live tape, and fuuuuuck it's so blistering. Never has a band sounded like a "whirlwind of grind" to me quite like them. They continue to be one of the best bands in the game right now.

And finally, we got the usual spread of interesting punk stuff from around the world. I know there's a lot of anticipation for the reissue of Herejia first LP, an all-time legendary classic of Mexican punk and required listening to understand the regional style. But I also want to draw attention to Detestados LP, we got a few copies of this lo-fi garage hardcore rager out of TX, and with its super-limited pressing size, I think this might be destined for a bit of kvlt status rather than obscurity. Great record.For more commentary on this stuff and more, please scope our Instagram page, where we review choice new arrivals as they come. If it sounds cool when we talk about it, it'll sound even cooler when you hear it streaming on the online store, and even cooler still when you buy the record and slap it on your turntable. --------------next month:-a new release on SPHC-another big box of the latest Japanese hardcore/crust/grind-plenty of power violence-more Spanish punk....and some other Euro and South American countries tooand more more more !!Thanks and talk more in July.-Dan
Previous Post
Next Post